At the beginning of November, I travelled to Edinburgh to attend Remediating the Social, the culmination conference of a three year European research project, ELMCIP (Electronic Literature as a Model for Creativity and Innovation in Practice).

I was invited to speak on a panel titled "Writing Together Differently", as a consequence of my involvement with The Digital Manual (a research project related to ELMCIP). In this capacity I have multiple hats on - UpStage, make-shift, FLOSS Manuals ... and for the ELMCIP conference I found myself referring to many of my own creative projects as well as to the online tools that I use to collaborate, organisationally and artistically. When I began to write notes for my presentation and think about what "writing together differently" means for me, it occurred to me to use etherpad (a real-time online collaborative writing platform) to compile my notes, to share this with others, and to demonstrate it during the presentation. I created a pad, which you can access here (and contribute to! it needs to be updated at least once a month or it will be deleted ...) then invited a few friends to come online and contribute during my talk. Six people joined me, three of them actively; you can play the timeslider of the pad in order to see how the writing was "performed".

While the text performance was projected on the big screen, I spoke about the UpStage user manual, how the FLOSS Manuals platform enables us to write collaboratively, and how this co-authorship generates a sense of co-ownership; people can contribute to the manual according to their areas of expertise, and have concrete acknowledgement of their input. I also talked about book sprints, and my experiences of participating both remotely and physically at different times, as well as proofreading manuals after a sprint. I got the impression that not many in the audience (which was largely academic and focused around electronic literature) were aware of FM or Booktype.

I also spoke about how online communities (such as UpStage, FLOSS Manuals, and the temporary communities created through the make-shift project) are largely constructed through text and writing processes: text chat, email, blogs, documented conversations, and tools such as etherpad which I use in many contexts - from drafting media releases to scriptwriting to meeting minutes; and I plan to use it also in performance some time soon. Online communities are literally writing ourselves into existence. 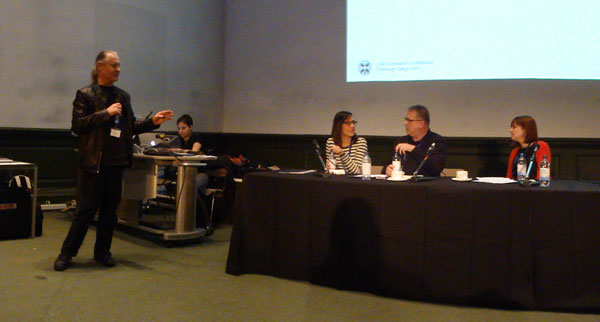 There were many interesting performances and presentations during the three days of the conference. Annie Abrahams' Huis Clos/No Exit gave us six people attempting to communicate in six different languages; Mark Amerika remixed the performance programme in Re:Mix; in the exhibition was Shu Lea Cheang's Baby Work. Ruth Catlow and Marc Garrett from Furtherfield (pictured, with Penny Travlou, being introduced by Simon Biggs) spoke about "DIWO" (doing it with others) with the subtitle "No ecology without social ecology"; during this talk Ruth used the word "metalogues" (written conversations among parties that preserve individual voices while revealing contested areas) and I have grabbed hold of this as a great way to understand a lot of the work that I'm engaged in. Daphne Dragona's presentation on the less positive aspects of the "gamefication" of everything was also very good. There were times in the discussions when it became clear that there was a significant divide between those who were happy to accept the ease and convenience of commercial social media, and those (including me) who felt strongly that this needed to be critically questioned and discussed. We did quite a bit of this over a few whiskies in our local, the Blue Blazer.

The entire conference was streamed so that people could participate online, and a live twitter feed was projected onto another wall in the conference room - which added a distracting yet somehow compelling layer to the event. The streams were also recorded and are now available for anyone to watch online. You can see my presentation here (2nd presentation but the others are also interesting):
http://bambuser.com/v/3112857 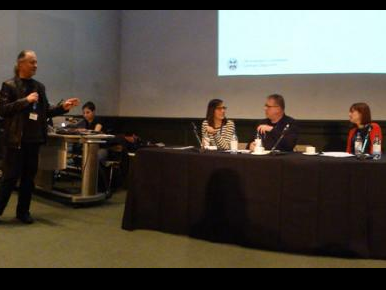 We invite you to help us as we work to help the development of free manuals and educational materials about free software.